On the Right Track

It Stands Out was recently invited and engaged to design and collaborate with Up’N’Up Inspirations to paint a large blank wall with a colourful Mural that had reference to the Community and history of Wallsend. This large scale mural is located at 67 Nelson Street, Wallsend, Newcastle. 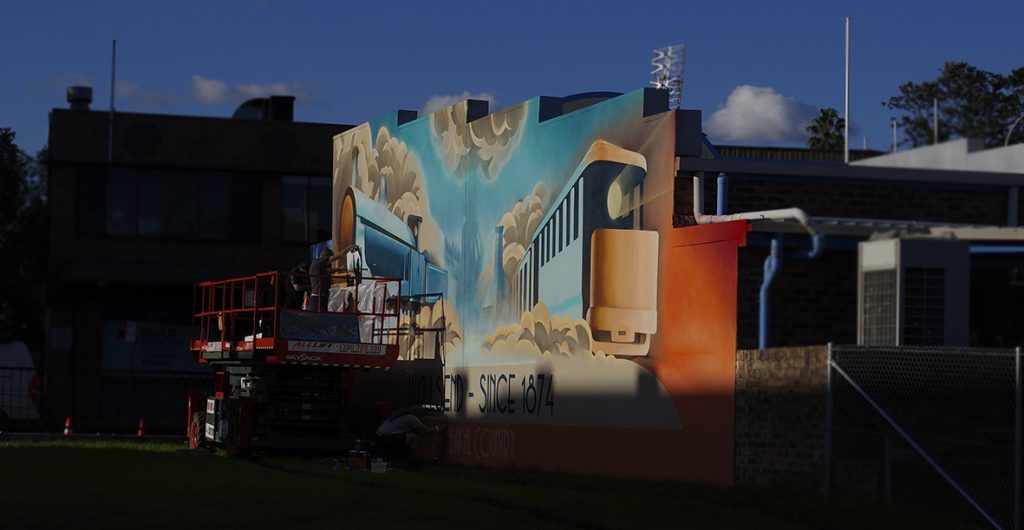 As part of the design process for this project we looked thoroughly at the coal history of the area and the amazing original mural in Wallsend that was painted by Peter Lewis in 1981. Peter’s original mural painted in 1981 was sadly destroyed in the Newcastle earthquakes and was a highlight of the area that was adored by the local Community. The mural gave strong reference to the coal history and the industry of the area that was also in line with our brief.

We used similar bold colours and Art Deco Industrialist styled imagery within our mural to create a similar feeling and nostalgia that Peter’s Mural had encapsulated. As part of our tribute to Peter’s mural and the history of Wallsend we used a similar art deco type face, colours and border to frame and title the artwork.

Using a one point perspective, we wanted to make this wall alive and feel as though the locomotive and steam tram were coming out of the wall, much alike to old art deco train travel posters. The smoke and steam coming from the tram and train envelopes the scene and creates more organic movement from the edges of the wall inwards. The idea behind this movement on the wall goes in line with the history of the area and moving forward with progress in local community and industry.

This mural project was a rewarding journey as artists; as well as an inspirational project and a great opportunity to give homage to Peter’s original mural.

Check out these photos of the mural in progress. Thanks to Michael from Saint Bede Studio for the great shots.. 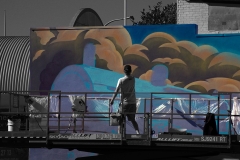 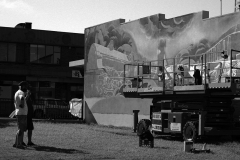 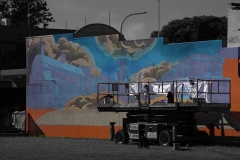 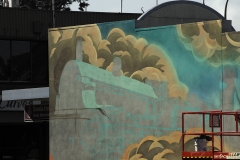 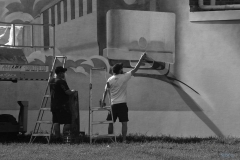 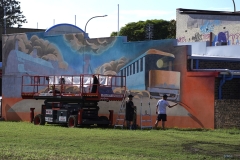 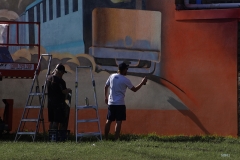 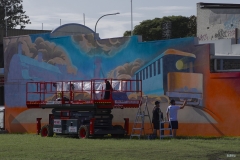 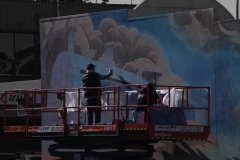 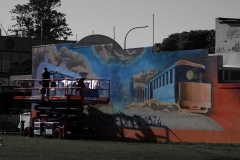 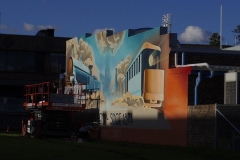 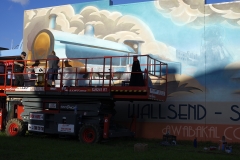 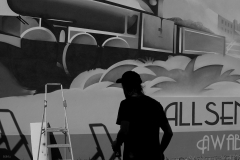 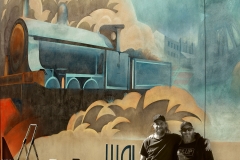 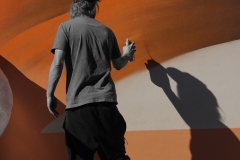 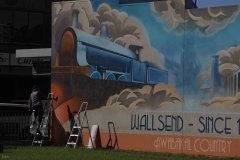 We were lucky enough to meet Peter Lewis the artist of the original Wallsend mural that heavily influenced this new mural. Fortunately he passed the wall whilst we were painting the new mural in Wallsend and were able to chat to him about his influence on the work and the original mural that he painted in 1981. This was a highlight of painting this mural as we were able to pay homage and respect first hand to Peter. 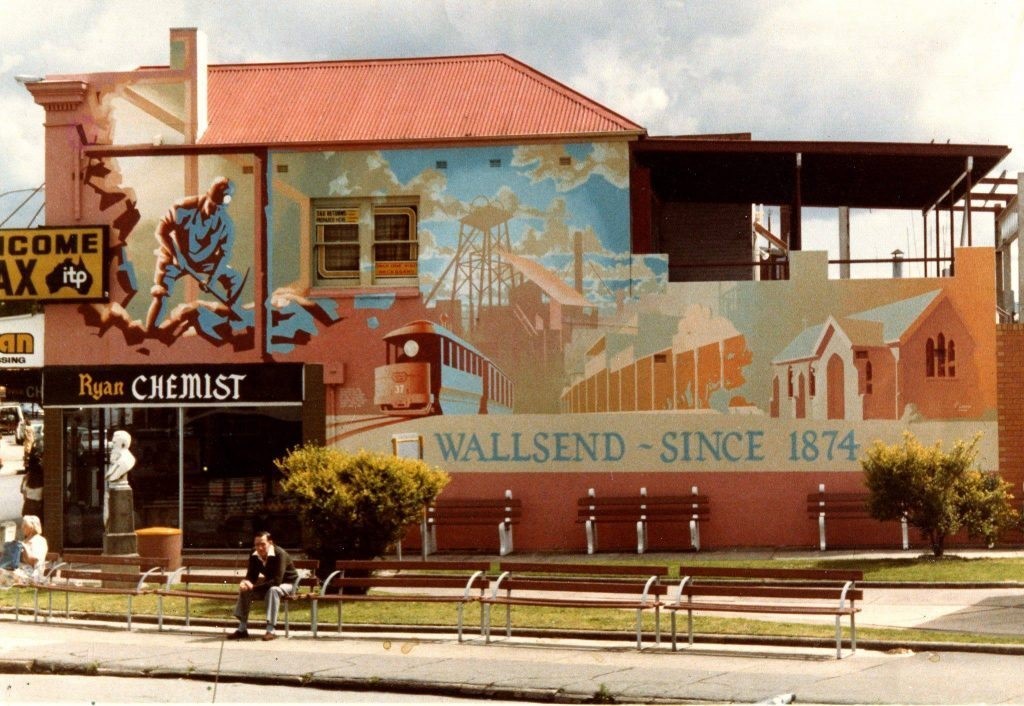 Peter Lewis has been the political cartoonist and feature artist at The Newcastle Herald in Australia since 1986.

Before Peter became the editorial cartoonist at The Newcastle Herald he was an exhibiting fine artist with several awards to his credit. His newspaper art has also won accolades, including first prizes in the National Rotary Cartoon Awards. Since joining the media he’s used his portraiture skill to become a leading caricaturist, and is now in constant demand for functions, able to capture the likeness of a person in a way that’s both fun and entertaining. His style can vary from outrageous to serious depending on each person’s preference. Rather than create throwaway cartoons, Peter prefers to draw caricatures that can be treasured for years afterwards.

Peter is also an experienced public speaker who can entertain entire audiences with his quick wit and fast brush on large sheets of paper. 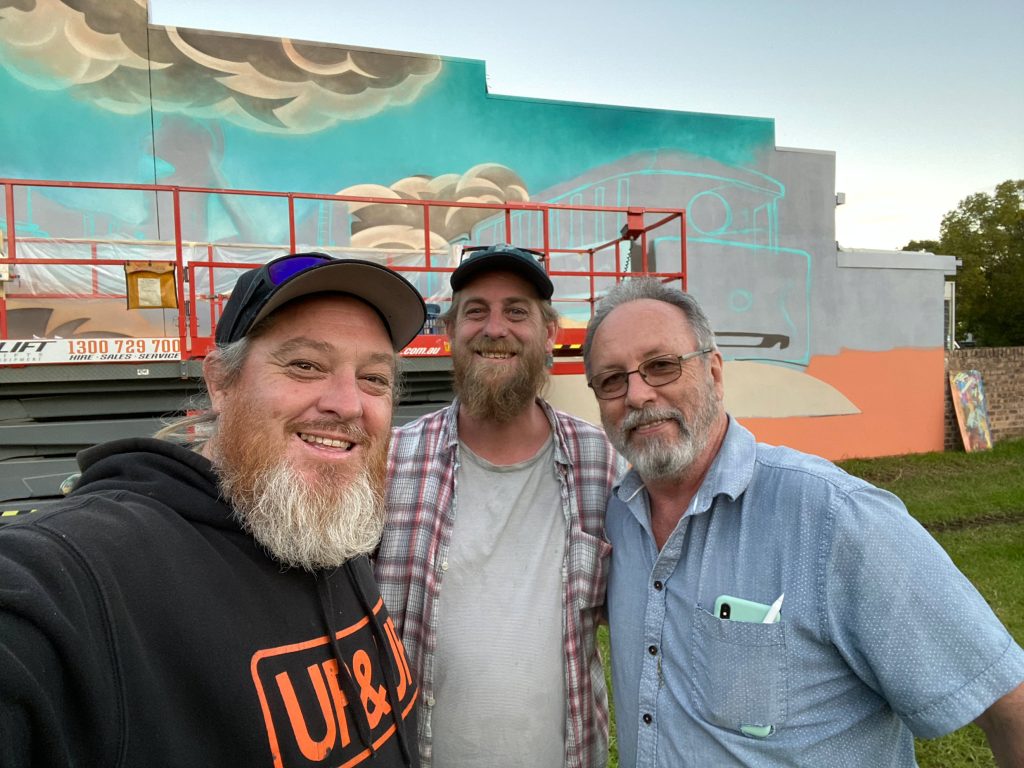 Wallsend Town Business Association has collaborated with local mural organisation Up&Up Inspirations and It Stands Out under consultation with Wallsend’s Heritage Group and the property owner to design a large scale mural on the side of local MP Sonia Hornery’s office at 67 Nelson St, Wallsend.

UP&UP Inspirations were approached by the Wallsend Town Business Association who had already spoken to the owner of the building with the idea to transform this large blank wall with a colorful mural. The owners only request was that the mural represent the history of the coal industry in the area. With this information the artists approached the Wallsend Heritage Group Inc who presented a series of photographs, coupled with information related to the history in Wallsend. In 2024, Wallsend celebrates 150 years of becoming a municipality and this is a modern way to honor one of Newcastle’s most heritage rich and proud precincts.

Wallsend Town Business Association Chair Wayne Rogers said “One important piece of information communicated to the artist was that many people in Wallsend were very disappointed that Peter Lewis 1981 mural was no longer there. Peter’s mural was loved by many, and this design was heavily inspired by his great work. “

Faith Curtis from Up&Up Inspirations said “The artists have had a great time installing this piece and meeting the many local people who stopped by to say hello and see what was happening. The encouragement and positive feedback from the community has been wonderful. A huge highlight for the artists was meeting Peter Lewis when he stopped by to have a look at what was emerging on the wall. Special thanks to Wayne Rogers from the Wallsend Town Business Association and Kavil Martin from the Wallsend Heritage Group Inc. for all their work getting this project off the ground and onto the wall!”

The mural was delivered under the City of Newcastle Special Business Rate Program, with additional funding provided by the Wallsend Town Business Association for completion.

“SBR funding is used for the promotion, beautification and development of our business precincts, delivering innovative and creative projects that direct benefit businesses by attracting visitation and making Newcastle’s local centres even better places to eat, drink and shop”.

“The advocacy of our Business Improvement Associations in engaging with business owners to activate their precincts is vital in supporting Newcastle’s thriving business communities such as Wallsend.

“City of Newcastle is committed to delivering significant amenity upgrades to the Wallsend town centre to support businesses and residents. Our acquisition and demolition of the vacant building next to the Nelson Street bridge will not only facilitate future stormwater improvements under the Ironbark Creek Flood Mitigation Plan, it has also opened up the space in front of this new mural to help create a more inviting entry point to Wallsend Park.”

For It Stands Out, this project served as a great canvas and project to make a meaningful mural that relates directly to the local area and community, as well as being a good reason to collaborate with good friends, colleagues  and painting partners Up’N’Up Inspirations

Our professional team of graffiti street artists for hire has built up a large collection of vastly different and unique mural projects across Melbourne and Australia. We want to offer our services to brighten up spaces across Australia with our creative murals.

So if you are looking to activate a space with a mural or artwork theme, look no further. We offer a unique service that specialises in high-end street art murals, graffiti art murals and signage. 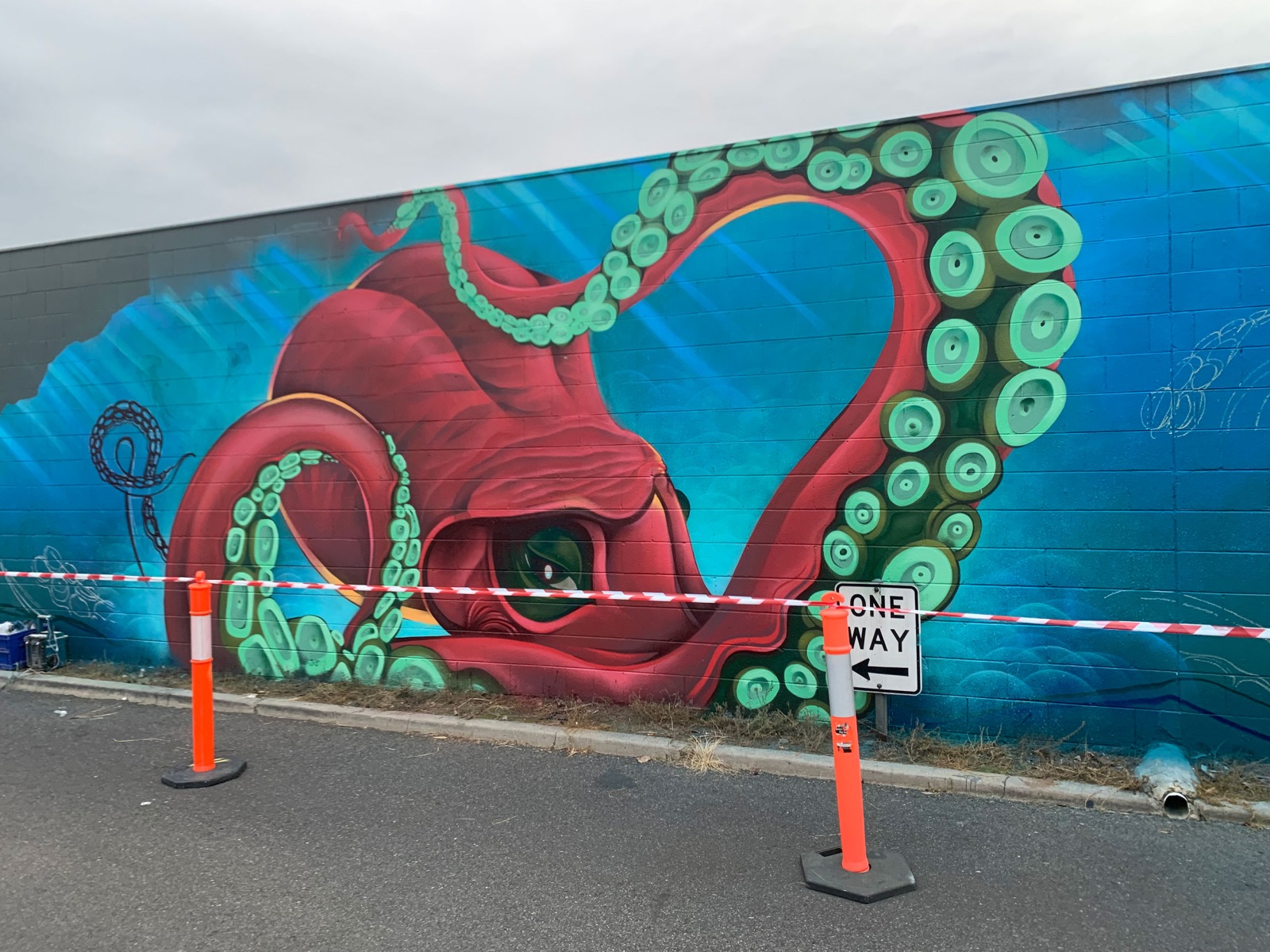 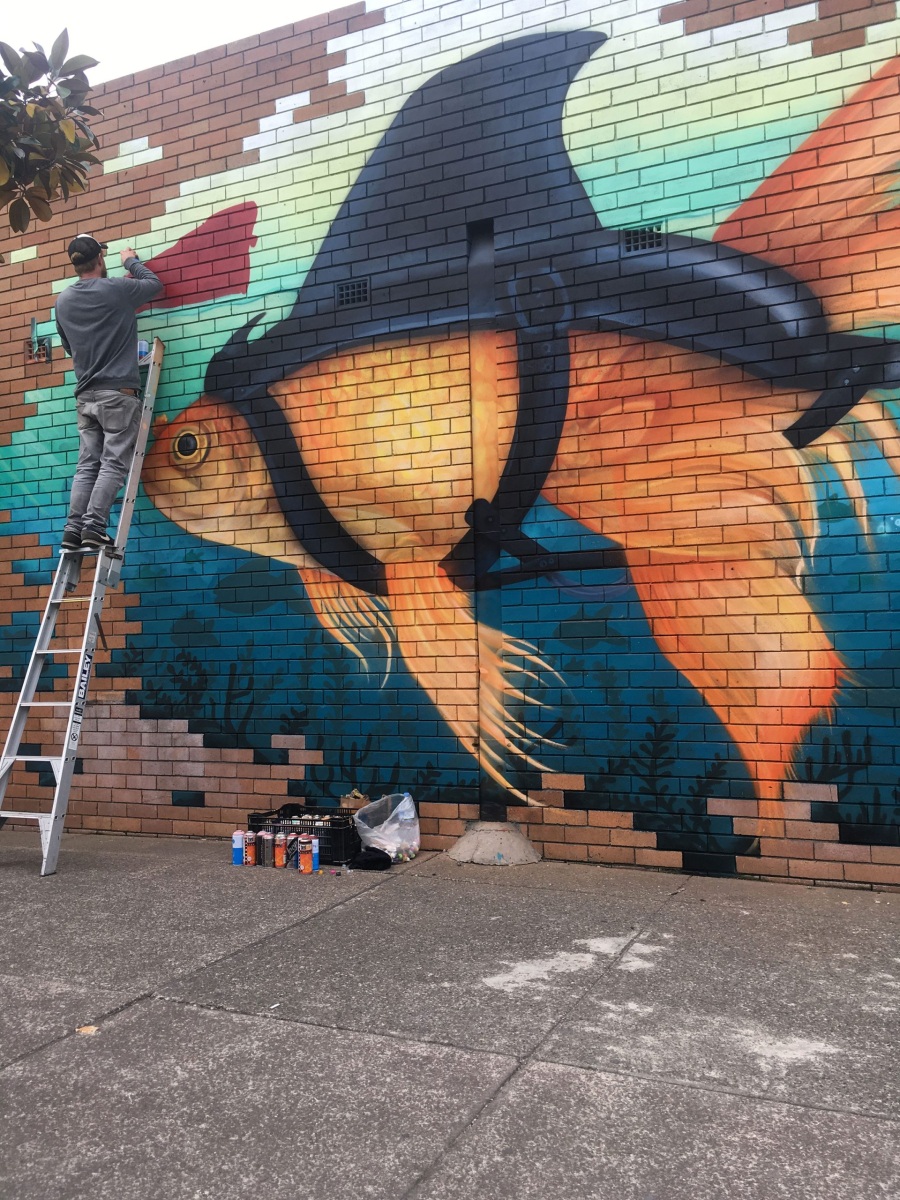 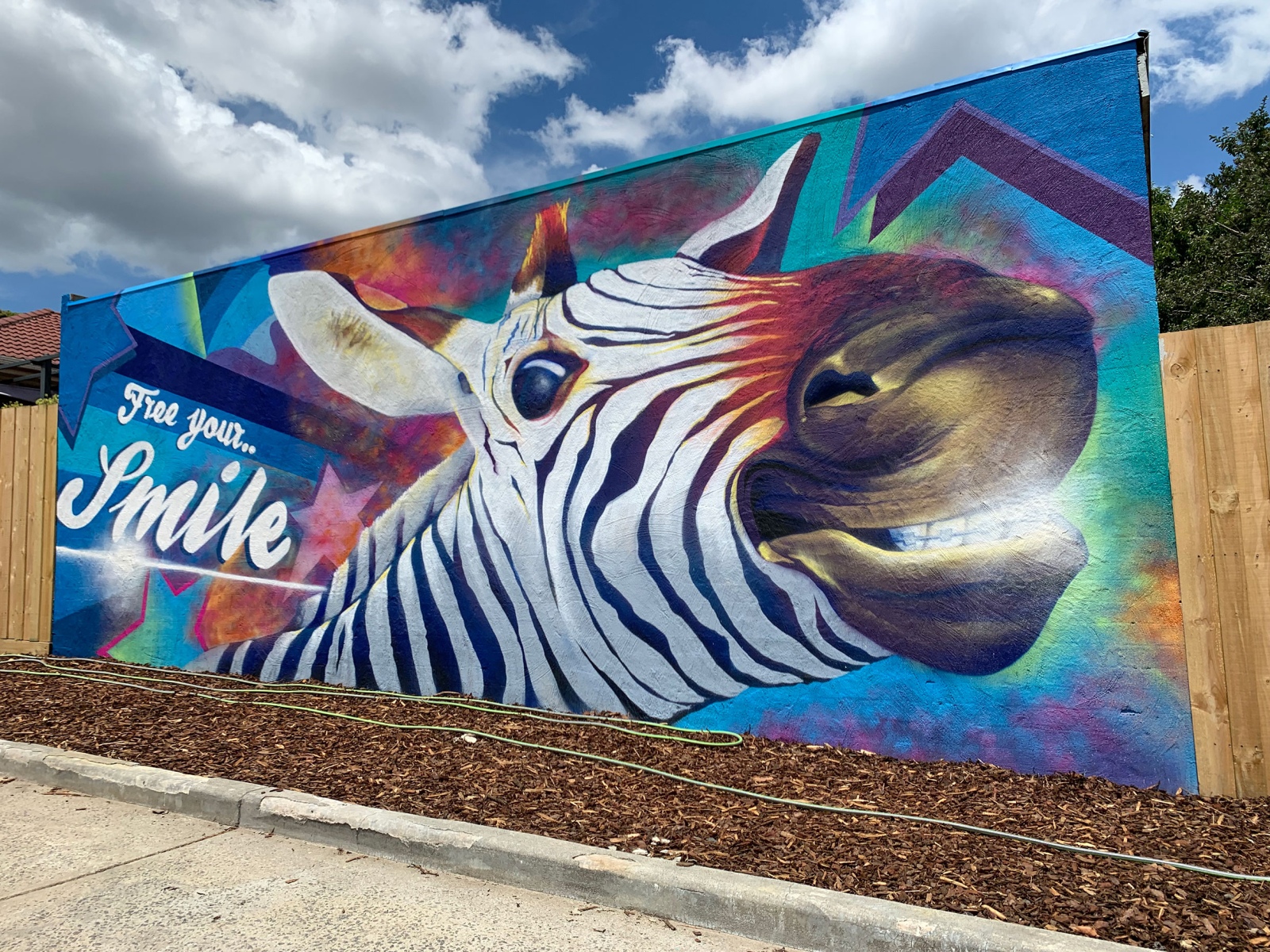 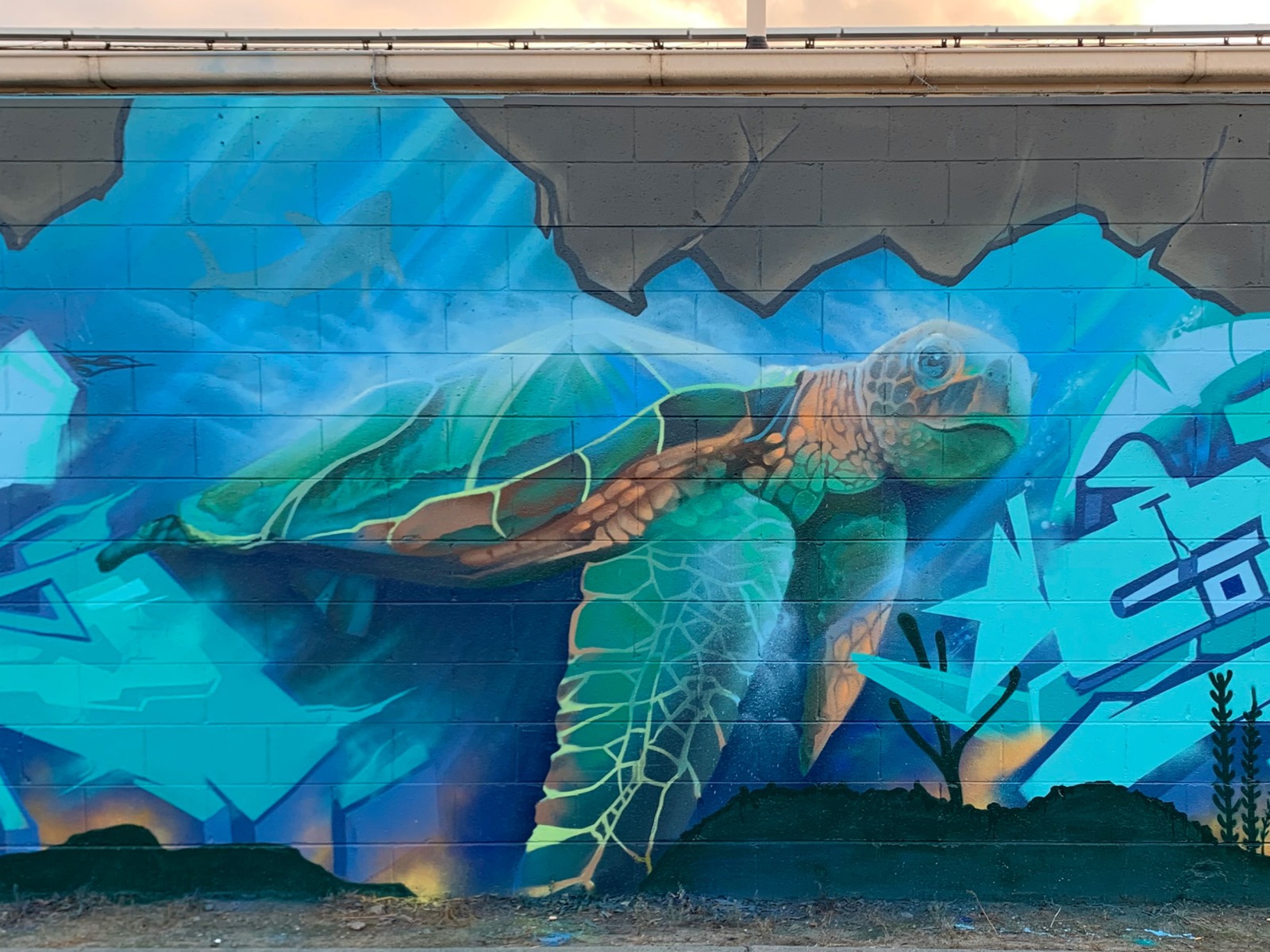 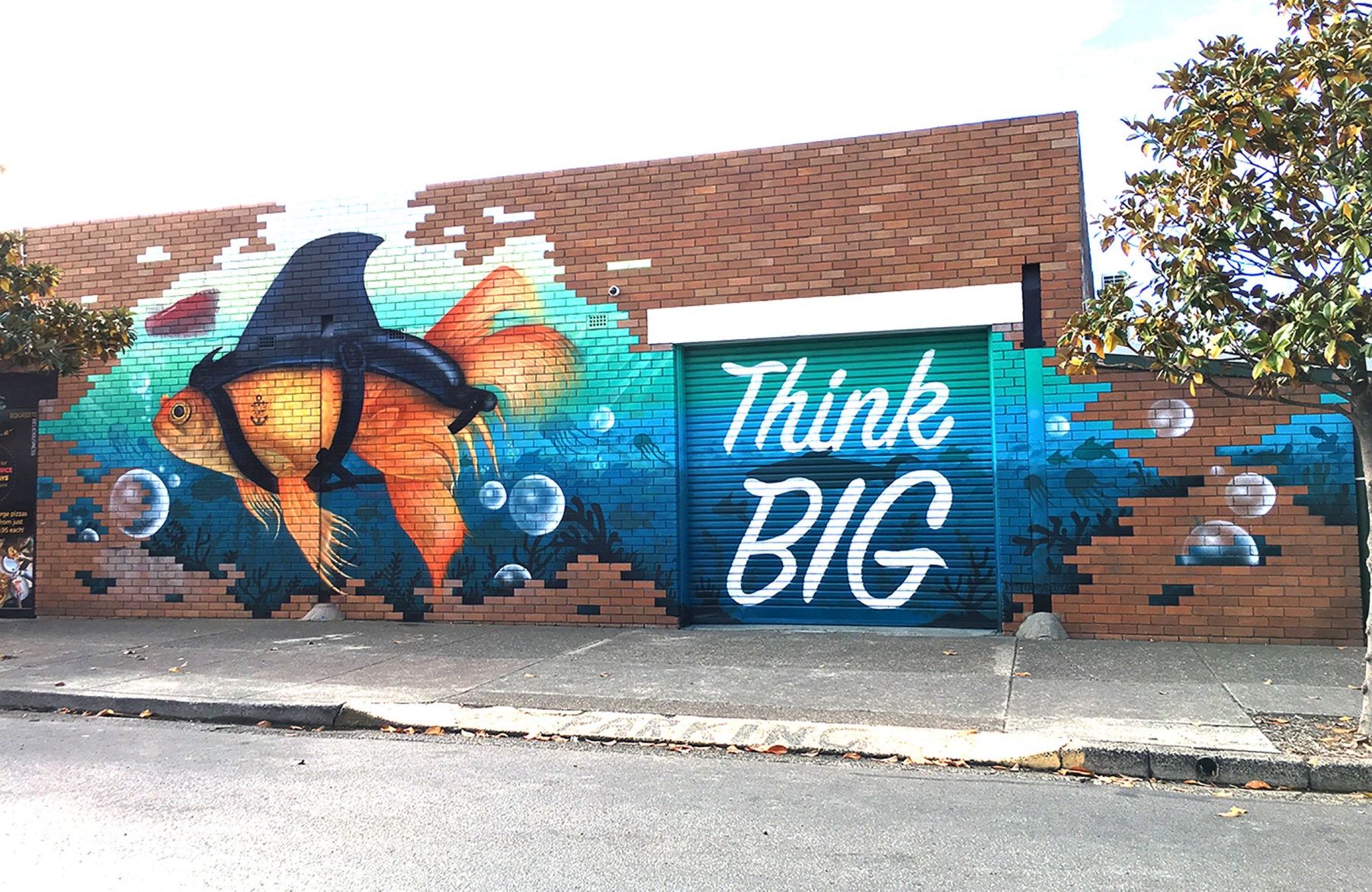 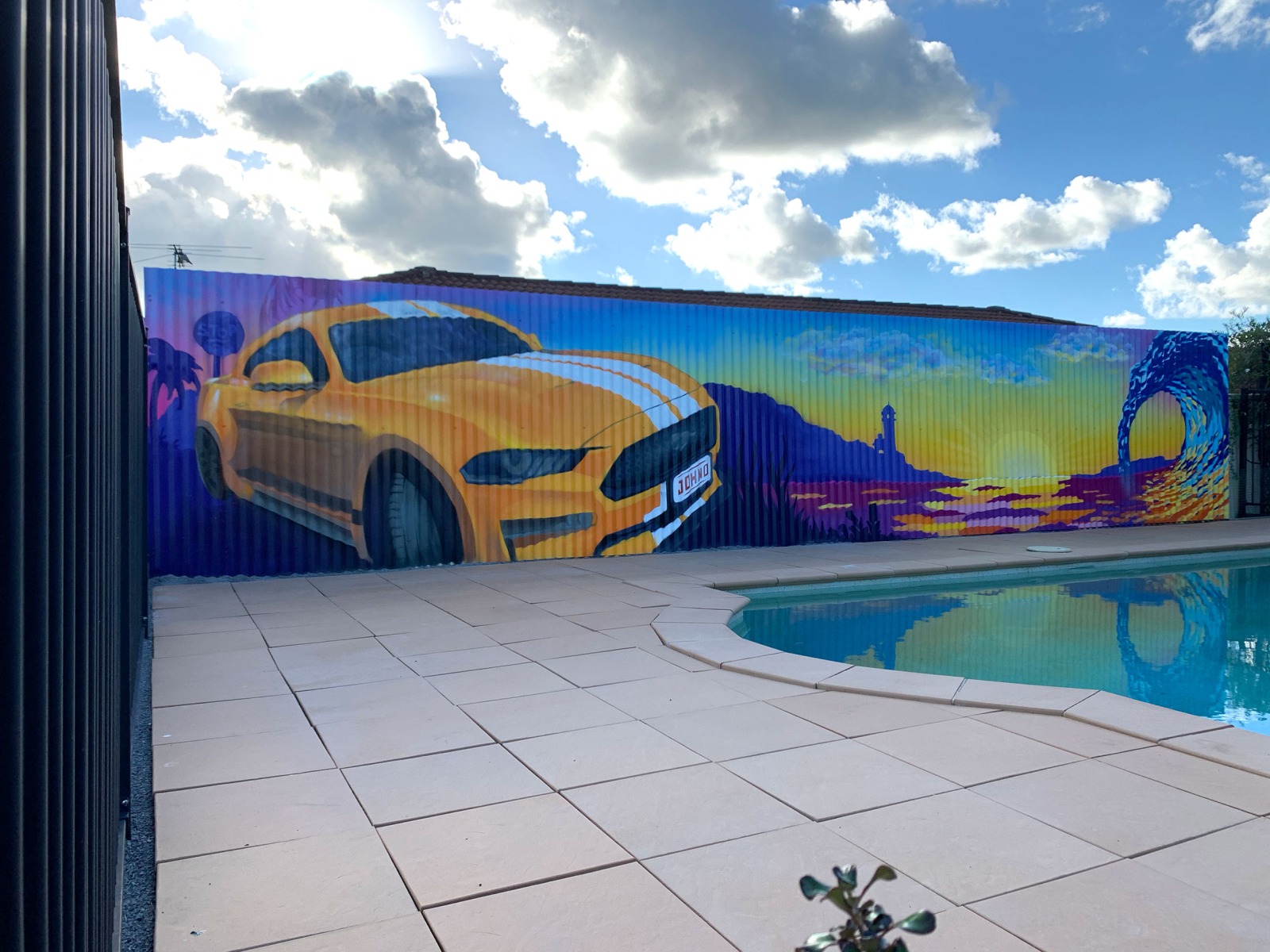 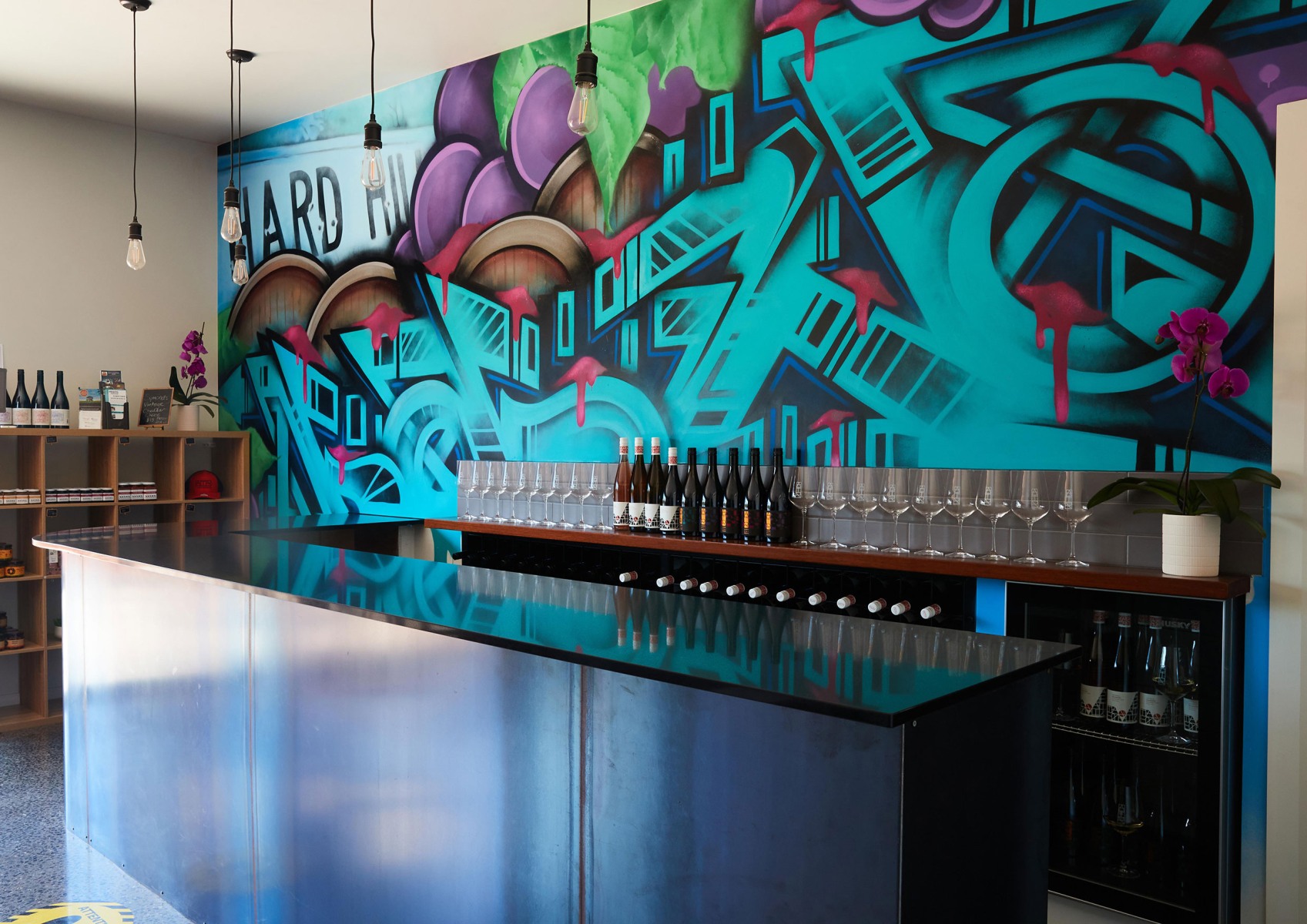